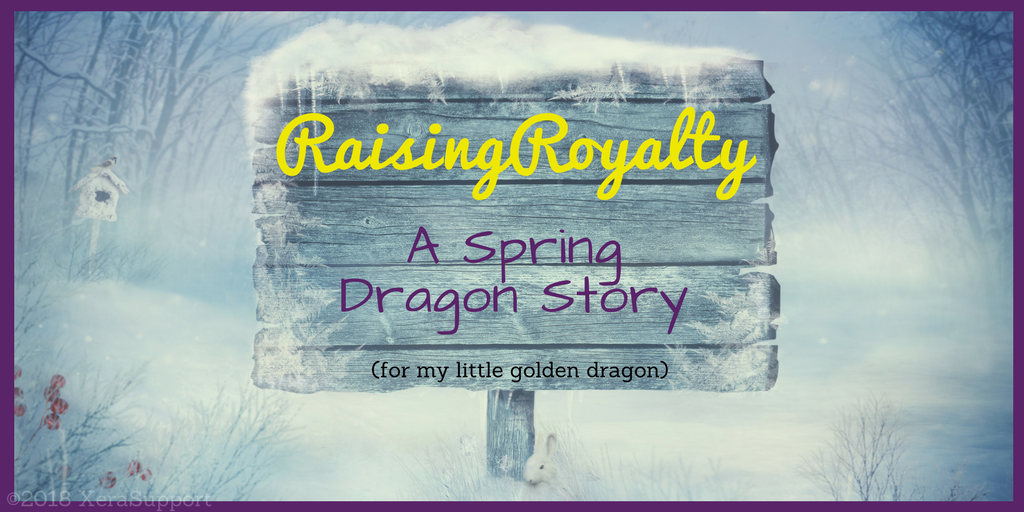 Once upon a time…

There was a sweet little dragon. She was small, but growing bigger every day. She had golden yellow scales rippling down her back, but her tummy was covered in small, shiny, purple plates. But she was shy, and so she only liked to play near the water, with her friends, the mermaids.

Her favorite time of year was when the mermaids came back to shore every spring. They left for the deep ocean during the winter, so they wouldn’t catch cold. So the sweet little golden dragon was lonely all winter. She did not like to be lonely. Lonely made her feel sad.

Every year, after Christmas, she anxiously checked off the days on the calendar. She would put on her giant warm talon covers, and her scarf, and her purple pom-pom hat, and go check the trees for buds. She measured the snow to see if it melted at all. And she listened carefully for the birds.

In January, every day she went out to look for Spring. And every day, she would sigh, trudge back inside, and check off the day. She missed her friends the mermaids. She would draw a picture of them and put it on her fridge. Momma Dragon made her hot chocolate and mermaid-shaped cookies to try to cheer her up, but the little dragon was still sad. She did not like winter.

Would spring ever come back? 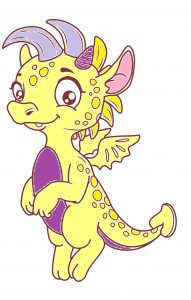 In February, the little golden dragon carefully made her search. Was the snow just a little lower? No.. it was snowing again. Did the sun seem just a tad brighter? Maybe.. no it was just reflecting off the ice on the path. The little dragon sighed again. She moped back inside, her tail and wings drooping.

Momma dragon made her a Valentine present. The card had mermaids on the front, and there was a new mermaid scarf for the little dragon. She liked the scarf. It made her feel a little better. And the card was fun to look at. But it reminded her of her friends, and how much she missed playing with them.

In the spring, she daydreamed, her mermaid friends would come back, and she could climb the rocks (without being afraid of slipping on the ice) and listen to them sing. She loved to hear the mermaids sing.

In the summer, she remembered, the mermaids would come right up to the shore and build sandcastles with her. And she could go wading in the sea with them. They were always careful not to splash her too much, so that her fire wouldn’t go out. If a little dragon’s fire got too wet, it would go out and then she would be sick for a looonnng time. She liked that her mermaid friends were careful with her, just like she was careful not to step on their tails. 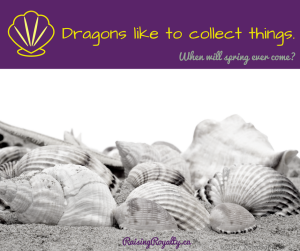 Mermaid tails had scales just like she had down her back. The mermaids also gave her pretty shells and sea treasures for her collection. Dragons liked collecting things. She would bring strawberries and blueberries to the mermaids, because they didn’t have land fruits in the sea. The mermaids loved strawberries.

The little mermaid curled up around her seashell collection, with her wings tucked around her. She put the biggest shell up to her ear, and pretended she could hear the ocean, even though she knew it was just her own heart beating. It made her feel like she was on the beach with her mermaid friends. When would spring ever come!?

In March, the little dragon brightened up a little bit.

The sun was definitely warmer, though the wind was still chilly. The snow wasn’t as deep, and every once in a while, she came across a muddy place on her trails. She wore her mermaid scarf, and kept her toe talon warmers out of the puddles. Wet toe talon warmers weren’t very comfortable. But the puddles made her happier.

The next day, the little dragon woke up and looked out the cave front. To her dismay, it was snowing!! She wailed so loud, Momma dragon came rushing up expecting to see a mean knight trying to attack her baby dragon!

Finally, gradually, it did warm up. A little. It seemed like spring was coming, but ever so slowly! Little by little, the sun grew warmer, and the wind wasn’t quite so chilly. The little golden dragon carefully checked the trees for buds and the ground for flowers.

It seemed like spring would never get here. The snow was mostly gone, but it was still too cold for the mermaids. But there were flower sprouts coming up in the sheltered spots. Though, the trees didn’t have buds yet.

Every day, the little golden dragon went out. She didn’t need her scarf anymore, or her toe talon warmers. But the trees still didn’t have buds yet. Her little wings rarely ever came up off her back anymore. Momma dragon was getting worried.

The little golden dragon was about to give up. Spring wasn’t going to come back this year. She just knew it. And her mermaid friends weren’t coming either. She sat in the muddy puddle in front of her cave, and tapped the cold water with her claw. She didn’t want to go look for spring anymore. 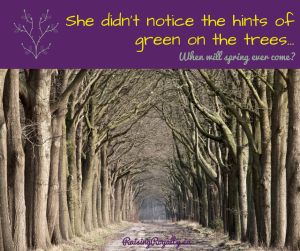 Poor little dragon. She was so sad, that she missed the sound of the birds singing in the trees. She didn’t see the hints of green at the tips of the twigs. And she didn’t even see the touches of color on the flower sprouts, that showed the blooms were coming. Spring was here, but the little golden dragon was too sad to see.

Momma dragon picked up her baby dragon, and cuddled her. Then Momma dragon flew low through the woods, and the little dragon snuggled next to her momma. This was nice, and this made her feel better.

Then the little dragon noticed something. Was that .. a green bud? She looked again over her momma’s big claws. That was another green bud. She looked down at the ground. There was something .. pink! And yellow over there! She tilted her head, listening hard. Over the sound of her momma’s wingbeats, she heard it. A faint trill of bird song echoed in the woods.

The little golden dragon’s eyes grew wide. Her mouth opened a little bit, and she let out a puff of smoke. Was it spring?

Momma dragon landed on the beach. She carefully put the little golden dragon down, and gave her a tiny, gentle push toward the water’s edge. The little golden dragon took one careful step, then another. Her tail tip perked up. Her little wings rustled and moved a little bit. The little dragon looked around the beach, picking her way across the dirt. Her wings stretched a little bit more.

Then she saw a tiny splash far out in the water. She shaded her eyes with a claw. Was it.. was it.. her mermaid friends? Were they back yet? Was it really spring now? The little dragon’s wings stretched out in excitement, and her tail lifted right up.

She moved toward the water a little faster. There was another splash. And a glint out in the water. And.. she listened carefully. That wasn’t bird song! That was.. that was.. MERMAID song!! 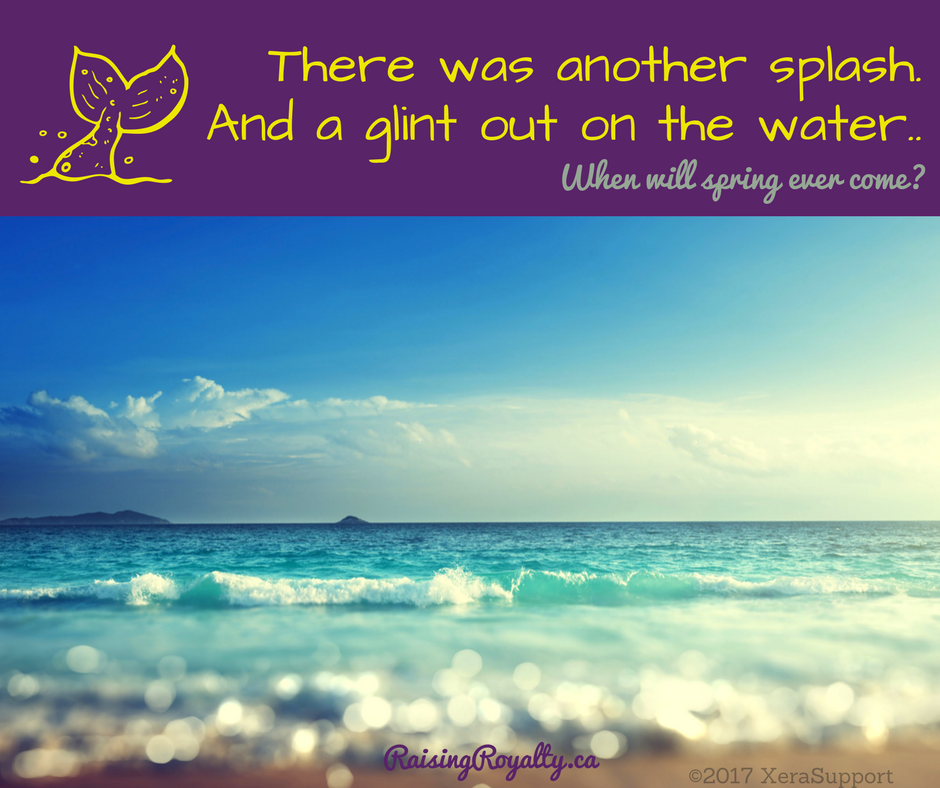 The little dragon’s wings began to beat up and down. She moved towards the water, not even noticing that her talons weren’t on the sand anymore. She was so excited! Spring was here! And her mermaid friends were back!!

And that’s how the little golden yellow dragon learned to fly.

When spring comes back, dragons fly.