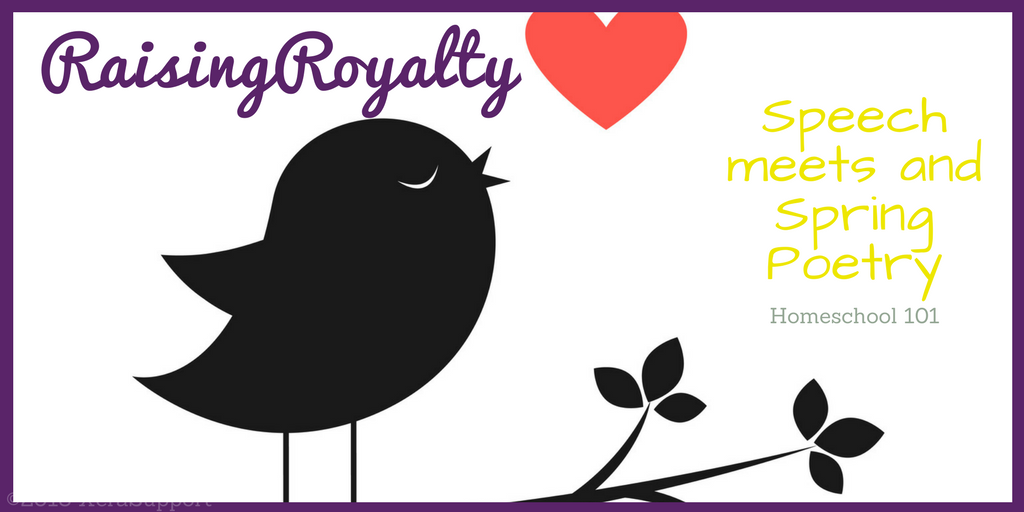 Last year February, my then-2nd grader participated in a speech meet. For her age group, she was supposed to recite a 12 line poem. It was her first time ever reciting a poem at one of these competitions, so we really didn’t know what to expect. She chose her poem, a classic piece of spring poetry, and memorized it. Fairly quickly, I might add.

On the night of the competition, she happened to be one of the first in her age group to go. So she stood in the required spot, said her piece, and sat down again. Then she watched, wide-eyed, as other kids got up, and rather than merely reciting as she did, they acted out their poems.

At the end of the night, she was determined to do better next year.

For this past February’s meet, she chose a different piece of spring poetry. She had it memorized before summer, and worked diligently on putting together actions to the words. She practiced slowing down and saying her poem with expression. And it paid off.

On the night of this year’s competition, she even dressed the part. I watched her step confidently into her position at the front, and thoroughly show off her skills. And all her hard work was rewarded with first place, and a trip to the next level of competitions.

The next level was held 2 weeks after the first one. My daughter was excited, and elated by her success, slightly overconfident. I gently suggested she should take the comments on her recitation marking sheets seriously, and practice a little more, but she brushed me off. She was sure she would do fine, and she didn’t need to spend any more time on it.

Moving up to the next competition

She dressed in her special outfit, and off we went early one morning to the competition. There were many more people here, and they offered a gym for playing in while we were waiting for it to begin. My daughter paid no attention to the fact that many of these kids were her competitors, and simply enjoyed the chance to play.

Finally it was time, and we moved to the room where she was supposed to say her piece. Again, she was near the top of the list. When her name was called, she stepped to the front, and looked around. I think it dawned on her then that she was competing against a lot of other kids. She took a deep breath, and went into her performance.

Unfortunately, nerves and lack of practice got the best of her, and she stumbled on a few phrases. Overall she did fine, but after she was done, she looked a little bit upset. And as competitor after competitor said their piece, letter-perfect and entertaining, she grew quieter and quieter.

We went back to the main gym play area, and my daughter changed out of her special clothes into ordinary (and warmer) clothes. I asked her how she thought she did, and she tried to seem unconcerned. But I could tell she wasn’t quite happy with her own performance.

We waited until all the other competitions were done. The kids played, and gradually more and more children came to the gym. Finally I brought everyone over to the seats, and broke out their lunches. And just as we finished eating, the awards announcements began.

My daughter sat nervously, unsure as to how well she had done. To her immense disappointment, she didn’t place in the top three. She held her certificate of accomplishment while others got the ribbons, blinking back tears. And when she came back to our seats, she buried her face in my chest, and cried. 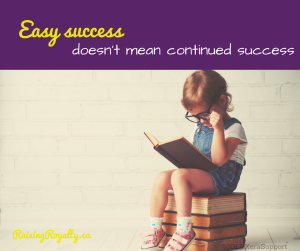 Determination for next year

After my daughter had calmed, she read over the marking sheets carefully. Unlike the local competition, this time she paid attention. She learned a hard-won lesson that easy success doesn’t mean continued success. And that there’s always room for improvement.

She is preparing now for next year. Last year she picked her poem quickly, but this year she is taking her time in choosing something. She is moving up from a poem that is 12 lines to something 16 lines or longer. Many of the competitors she had last year used story poems — poetry that told a story, and usually had a surprise or funny ending. So I think she’s looking for something similar. She’s changed her mind a few times over the last few weeks.

Competing in these speech meets is full of learning opportunities

From the exposure to poetry and the discipline of memorization, to the poise and performance required to present her piece, there are so many learning opportunities in a speech meet. And beyond the academic achievements, the life skills of determination, self-discipline, resilience, handling both success and disappointment — well, I’m grateful my daughter has the chance to experience all of this.

Poetry is a great introduction to good literature and is easy to memorize. That’s why I turned my daughter’s first poetry choice into copywork. “Trees” by Joyce Kilmer is a classic poem, and full of gorgeous spring imagery.  To expand this activity, you can encourage your children to draw pictures to illustrate the various stanzas in the poem. Then use the complete poem as a way to explore rhyming, similes and metaphors.

You can get your poetry learning activity here.

And if there’s a speech meet competition for children near you, take advantage of it. Or start your own.