Comparison can turn into a competition

I was sitting beside another parent at my daughter’s swim lesson. We chatted briefly, and she mentioned she had 4 children, including twins. She smiled, like all moms of many do, and said that sometimes it was hard, but she loved it anyway. I agreed, and mentioned that I had 6, including 4 in 5 years. I wondered, as I often have, if twins would have been easier. And the comparison game was on, unintentionally.

What is comparison supposed to be?

But when it comes to certain things in life, comparison always seems to turn into competition.  Ask two workers at a company to compare jobs, and inevitably, it will devolve into an argument about who’s job is harder. Couples who compare the division of labor will often end up fighting over who does more. And children often start yelling matches with “My daddy is better than yours!” echoing in school playgrounds.

Why do we turn comparison into competition?

When we compare two things, we often feel like we have to make a choice between them. We focus on what’s different rather than what’s the same. And when we see only differences, it’s easy to try to say one is better than the other. And then, having made a choice, even though it might not have been on purpose, we feel like we have to defend our choices. And defend them we will, despite the fact that no one is actually attacking.

The comparison game is insidious and creeps up on us unintentionally. An innocently made statement about personal choices can be taken as an attack on someone who made different choices. And then you have a fight. All because of the comparison game.

The results of the comparison game.

The comparison game destroys any chance of a relationship.

If you want to make friends, you have to prevent the comparison game. When comparing turns into competition, people get hurt and angry. And hurt, angry people don’t really want to spend time getting to know someone else, especially the person who triggered those hurt, angry feelings.

This is tricky, because we can only really make friends by finding out what we have in common. So you have to do some comparing to find those similarities. And it’s a fine line to walk between sharing your experiences in sympathy, and not one-upping the other person.

But you can prevent the comparison game by focusing on where you’re both alike, rather than where you’re different. Watch for those signs where you want to “top that” in conversation, and change the subject to another area of your lives. Then you can preserve the relationship, and even build it, by making them feel listened to and valued.

When you fall into the comparison game, and compete with someone else’s situation, you can inadvertently damage their mental health. We don’t know how someone else is feeling about themselves or their situation. They might be feeling down and overwhelmed about their struggles. And then you come along, and in effect, tell them that their situation isn’t anything — here’s yours and it’s so much worse.

You may be trying to sympathize. Maybe you’re sharing your similar experience out of a desire to show them that they aren’t alone, trying to support them! But they aren’t always hearing sympathy and support. What they may hear is competition on who’s got it better or worse.

You can prevent the comparison game from negatively affecting someone’s mental health by asking questions. Rather than sharing just the situation you’ve faced that is similar to theirs, share your feelings about it. For example, instead of saying, “Me too!”, say “When I was in that situation, I felt this way when I was there.” Invite them to join you, rather than one-up you.

The old saying is, you don’t know what it’s like till you’ve walked in someone else’s shoes. We forget this, because we think that our similar situation is the same as theirs, only better or worse. We compare judgments, rather than details. We attach values of good and evil to everything, than try to compare the degree of “goodness” or “badness” in every situation, rather than just comparing the problems and solutions.

When we compare relative morality, we tell the other person that their problem isn’t really worth anything. And in effect, we tell them that they themselves aren’t worth anything, especially if that was their main source of discomfort.

Prevent the comparison game by asking questions. Instead of turning the conversation back to yourself, focus on them, and ask them about their problem or situation. Asking questions  shows that you’re genuinely interested in them and that you’re listening. It makes them feel understood. In turn, they’ll be more willing to listen to you, when it’s your turn.

It’s so easy to fall into this trap. We compare constantly, and it can be hard to stop. But if all your conversations are turning into competitive games about who’s more tired, who’s more stressed, and who’s got more to do, all you get is loneliness. Nobody wants to talk to someone who’s just out to compete with them all the time.

Don’t be that person. Share your feelings, not your judgments. Invite rather than compete. And ask questions to find similarities. Focus on what you have in common. 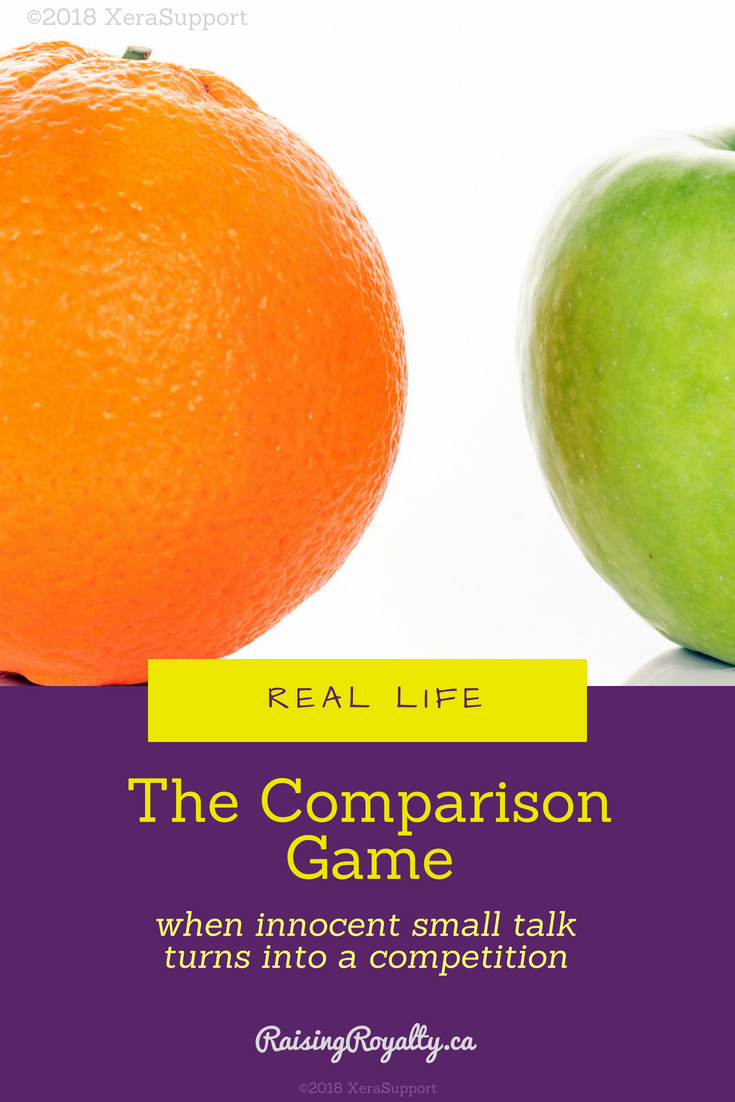