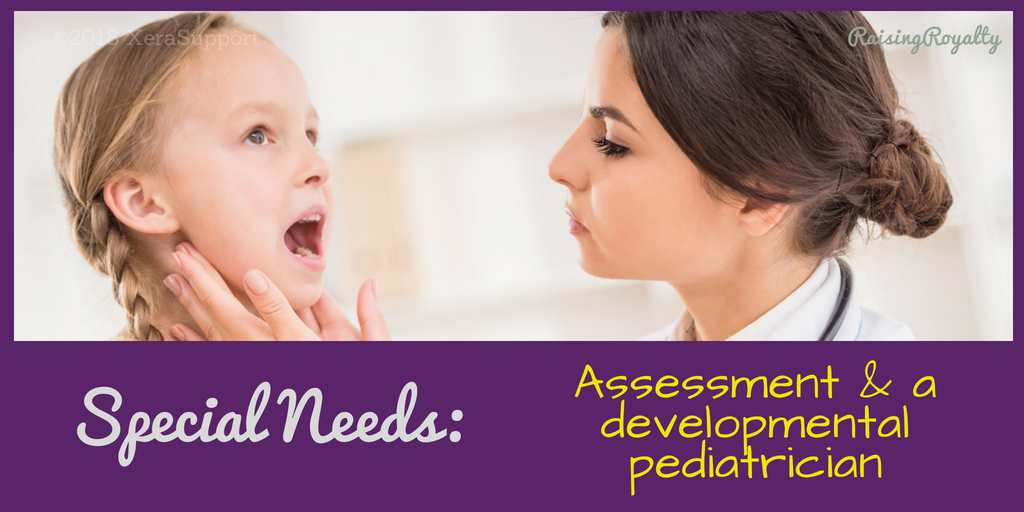 She was almost 5 years old when we finally landed in a pediatrician’s office that seemed to actually take us seriously. I spent a good 30 minutes describing her history and what we’d tried so far, giving him copies of the reports that I had — the special needs assessment, the letters, the tests — and he listened.

He referred us to genetic testing and a developmental pediatrician.

It took months to get the appointment to the specialist, coincidentally at the same centre that had done the autism screening.

In the mean time, our lives were turned upside down.

My marriage ended, and my ex-husband moved out. Our daughters were 5, 4, almost 2 and 3 months old, and my oldest was 10.  It was a hectic time, extremely stressful, but the girls and I pulled closer together.

The first appointment with the specialist was in February 2014. I arranged child care, and packed up my baby and my daughter for the hour long trip to the children’s centre and the developmental pediatrician.

I was on pins and needles. Would she listen?

Would she see what I was dealing with? And would she have suggestions?

It was an incredible appointment. It was by far the longest appointment I had had to date with anyone involved with my daughter. The doctor went over, in detail, her entire history, from my pregnancy with her, on.

She tested my daughter on motor skills, language skills, play and social interaction. She examined her physically, measuring head and height and weight and testing reflexes.

It was thorough and took two full hours to complete.

At the end, she confirmed that there were significant issues going on.

I was both relieved .. and very saddened. Part of me was hoping that it was just normal childhood issues. Though I knew that it was far from normal, given that you don’t go to a specialist in childhood development for merely slow development.

But there’s something about hearing it from a doctor, seeing it in black and white, that gives it a bit more oomph.

She asked me for specialist hearing tests, vision tests, blood work and put in a referral to a child psychologist.

She said that what we really needed was a complete psychometric assessment, to determine where and why and how much the delays were impacting her life.. and her future.

We completed the bloodwork, and the vision testing. It turned out she did need a mild prescription, but the sensory issues were causing that, not any real issue with her eyes. My daughter needed tinted lenses to protect her eyes from the extreme light sensitivity that was causing strain and squinting. She also needed vision therapy to help with tracking issues, which were sorted out quickly.

6 months later, we were back for a follow up.

My daughter had her 6th birthday, and it was becoming apparent that the gaps were becoming larger and larger. She still wasn’t nighttime toilet trained, couldn’t bathe herself independently, brush her teeth, and was still working on learning her letters and numbers. It was discouraging.

The doctor asked me for an OT assessment, and checked in on the difficulties finding support.

As my daughter was getting older, early intervention services were less and less available.

And her anxiety issues were making it less and less likely that traditional school would be beneficial to her, though I was willing to consider it.

We moved that Christmas, and changed counties again. At the next appointment in January 2015, we went over the blood work that had been done, and I detailed the social communication issues we were having.

The need for that psych assessment was becoming more and more apparent.

August 2015 was the next appointment, my daughter was now 7, and it was frustrating for both the doctor and I. Support services were hard to find, as without a diagnosis or a label, few agencies were able to help us.

That fall, I was able to pay for the OT assessment, and it showed improvement in her fine and gross motor skills. But the sensory issues were significant. I was able to get some ideas for tools I could use at home to help with the sensory input my daughter was craving — things like weights, fidgety-toys, even using a small, indoor exercise trampoline.

Our next appointment was scheduled for February 2016, but in January, I got a call requesting that we go back to the centre for a full speech-language assessment.

I had known that her language issues were significant, but I hadn’t realized just how far behind she was. They warned me too that what she tested at and what she functioned at were usually different by about 6 months.  In testing, in the controlled environment, children test 6 months higher than where they usually function.

She was 7. Accounting for that 6 months, it meant she was functioning somewhere between 3 and 4. In one area, the testing showed that she understood at closer to 2 than 3!

I struggled to wrap my mind around it.

We attended the appointment in February, and met with the developmental pediatrician and the speech-language pathologist together. I also gave the report from the occupational therapist.

That psychometric assessment was becoming urgent!

The pediatrician sent more paperwork for genetic testing and a child development inventory, which I completed and sent back in.

A few weeks later, I got the report from that, and it was also very uncomfortable. The inventory, which was only supposed to test children up to age 6 (and my daughter was now 7.5 years old), showed that overall her development was only around a typical 4 year old — her language skills were closer to that of a 3 year old, and her social skills were that of a typical 2.5 year old!

Thankfully, we were then in the process of that psychometric assessment. The referral to the psychologist came in May 2016. I hoped for answers, direction, and help.