Birth story: the Truth of Hope 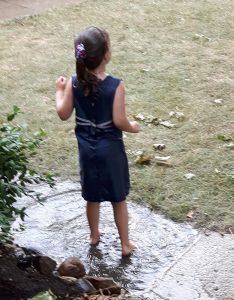 September is my 4th daughter’s birthday. It’s hard to believe that she’s not a baby anymore! She was the only one of my five girls to be born at home, so her birth was special, in more than one way. She gave me hope.

This little girl was my miracle baby. Her conception was Christmas Eve, after a year of turmoil and incredibly stressful events. She was my shocking present, as I was still nursing my then-9-mo-old middle daughter. Finding out I was pregnant again both excited me and scared me to no end.

Two babies to care for

I nursed my middle child through my pregnancy, till I was about 6 months pregnant. Then my toddler figured out sippy cups were mobile and Mom was not, so she stopped nursing on her own. Nursing while pregnant was definitely challenging — every time I nursed in the morning, I felt so nauseous! But having that special time with my middle baby was so important, I didn’t want to give it up.

My pregnancy was normal and uncomplicated, even though my life wasn’t. We moved when I was 4 months pregnant, and my marriage underwent a trial reconciliation. It was challenging and stressful, so I was thankful that my pregnancy was relatively easy. But there was hope again.

Would labour ever really start?

I was due the end of September, but for a few weeks before I would have contractions, on and off, that kept me on edge.  Finally, I decided that I needed to do something to turn that pro-dromal labour into something that would actually go somewhere. My then-husband and I took the kids on a long walk one evening, and by the time we headed back home, contractions were definitely more regular.

I had a midwife with this baby, and we were planning a home birth. After putting the kids to bed, I laid down, hoping to sleep, despite a contraction about once an hour. But after a couple of hours, the contractions were about 20 minutes apart, and just enough that I couldn’t sleep. My then-husband slumbered on, as I tossed and turned trying to get comfortable for a few hours.  I had hope that this would finally be it.

Finally, I knew this was real

By 2 am, they were regular enough that I gave up on sleeping, and started reading on my Kindle. By 4 am, I was timing them, and they were 8-10 minutes apart. I thought about waking my then-partner, but decided to wait.

Dawn came, and I knew it was time. I woke my husband, and called the midwife. He got my other children up, and called his brother and sister-in-law, who was our child-care for the occasion. The kids went with their aunt and uncle for breakfast, sleepy and confused. The midwives arrived around 7 am, ready for action.

So different from the rest

It was a good thing they came too, because labour was definitely in progress. Contractions were every 1-2 min apart and strong! I was barely coping, but I was excited too. I didn’t realize it then, but I was hitting transition, around 9:30 am, and feeling desperate. There was still a break between contractions, though, which was different than all my other labours, so I thought there was still some time to go. Faint hope, that.

I remember standing in my bedroom, because laying down hurt too much. I would sway and moan through a contraction, then breathe. Finally, my knees grew shaky, and I felt as though I was going to fall down with the next contraction. My midwife got me to lay on the bed, and sure enough, it was almost time.

There was still a break between contractions, and a bit of a lip on my cervix that was delaying things though. My midwife pushed on that while I pushed through a contraction. After a couple of pushes, she was crowning. After a couple more, we had a baby girl at 10:10 am, 8 lbs, 4 oz. 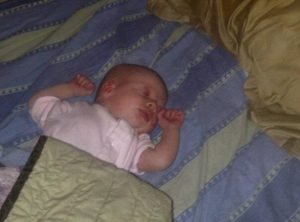 Being at home made the period immediately after birth incredibly special. After the midwives were satisfied that all was well (they were a little concerned that I was bleeding heavily, but that’s normal for me), I snuggled in with my baby and had a nap. It was amazing to have the peace and quiet and time to just bond.

That night, I felt amazing, for having just had a baby. The rest of our daughters were returned to us in the evening, and my in-laws also brought us dinner, which was much appreciated. They all oohed and ahhed over the baby, and then I got everyone into bed. I also did the birth laundry right away, and then tucked myself into bed.

Holding on to hope

Unfortunately, this baby girl did have some issues with jaundice after, so we did end up in hospital briefly. And in the following weeks and months, I had trouble with a bit of the baby blues. It felt as though I was walking through a fog, that I couldn’t shake. My then-husband took some extra time off work to take care of us — and despite the mild depression and other stress, it was the best time in our marriage. But by Christmas, I was feeling more normal, and ready to take on caring for my family.

This darling girl now is possessed of the most beautiful long golden curls, and big blue eyes. She is bright, curious, and showing all the signs of being a budding artist. My little girl loves dragons and mermaids, teddy bears and elephants, and wants two “little white fluffy puppies” for pets. She is sensitive and caring, easily hurt but just as easily forgiving. We named her the truth of hope, since at the time, she was the visible symbol of hope for my family. She is still my reminder that I hope in the truth. She is a delightful princess and I love her dearly.